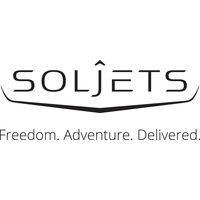 PARK CITY, Utah, March 4, 2019 /PRNewswire/ -- SOLJETS, a boutique business aircraft brokerage firm, recently announced its 2018 year-end results to its customer base with a predominant theme of growth. The SOLJETS team completed its 100th company transaction in late Q4 2018, and finished the year at 106 total transactions since the company was founded less than four years ago.

SOLJETS also saw a 10% YoY growth in sales revenue, and a 40% jump in the team's employee count. "We're incredibly proud of our team's achievements the past few years. We've also been humbled by the process of starting and building a business," said David Lee, Co-founder and Partner of SOLJETS. While Lee admitted each deal they've done thus far has had its own challenges, he noted all of them came with lessons learned. "You can't learn the aircraft transaction process by reading a book, nor can you be passive in the transaction itself and hope for a good result. It's creativity, steadfast perseverance, and expansive business and technical acumen that gets deals done these days," mentioned Lee, also adding these are all traits he looks for in all SOLJETS team members.

The company is looking forward to additional growth in 2019. "We recently hired a Regional Sales Director for the Western USA, and we currently have eyes on another two candidates for additional sales coverage in the U.S.," noted Greg Oswald, SOLJETS Co-Founder and Partner, of the company's immediate personnel plans. SOLJETS also just recently finished building their new offices in Park City, Utah. "We're building our future, literally and figuratively," said Oswald.

Of the 106 deals completed through the end of 2018, SOLJETS transacted a myriad of different aircraft types, 32 models to be exact, from light to midsize to super-mid business jets, and even jet fighters. The firm has bought and sold planes in 18 different countries.

ABOUT SOLJETS: Founded in 2015, SOLJETS is a business-aircraft brokerage firm with offices across the United States in Arizona, Atlanta, Boulder, Chicago, Park City, and Sacramento. The unique SOLJETS client-centric model focuses on fostering buyer and seller trust and peace of mind throughout every transaction. SOLJETS serves clients globally and has completed over 100 aircraft transactions…and counting.

This article was originally written by SOLJETS and published on PRnewswire on March 4, 2019.