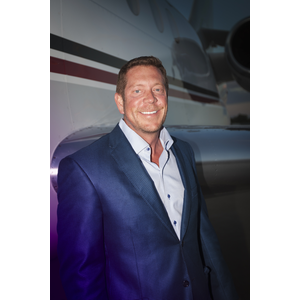 Brad Harris is founder and CEO of Dallas Jet International.  Mr. Harris holds a Bachelor of Science Degree in Professional Aviation and Airway Science and a Masters Degree in Industrial/Organizational Psychology from Louisiana Tech University.  Mr. Harris entered the aviation industry in 1989 as a corporate pilot for a Fortune 500 corporation.  In 1993, he started a successful aircraft leasing and renting company that expanded to a successful aircraft management company in 1994.  In 1993, Mr. Harris began his aircraft sales career and, in a very rapid fashion, became one of the most highly respected aircraft brokers in the World.  In 1994, Mr. Harris started an aircraft sales, consulting and brokerage company that is known today as Dallas Jet International.  Mr. Harris is a current airline transport pilot who is type-rated in ten (10) different jet aircraft including the Gulfstream 550, 450, 350, GV, GIV, GIII, GII, Hawker, Falcon, Citation, Beechjet, Lockheed Jetstar II, Diamond Jet and King Air 300/350.  In the many different aircraft markets, Mr. Harris parlays extensive hands-on knowledge and experience into clear results for his clientele.  In addition to Mr. Harris maintaining a career focus on aircraft sales, he also has extensive experience in aviation consulting and management.  Included on his client list are several clients for whom Mr. Harris and his firm have set up flight departments, consisting of aircraft crewing, aircraft management, aircraft maintenance and aircraft operating budgets.  What most people do not know about Mr. Harris is that he possesses significant entrepreneurial experience in real estate and commercial insurance.  This business experience, combined with his unparalleled experience in all facets of corporate aviation, has been the foundation of success for Dallas Jet International and its clients.   Mr. Harris currently sits on the Advisory Board for General Electric Capital Corporation, Presidents Advisory Board at Embry-Riddle Aeronautical University and Customer Advisory Board at CAE Simuflite.  He currently serves on the Board of Directors for National Aircraft Resale Association (NARA) as Chairman Emeritus.